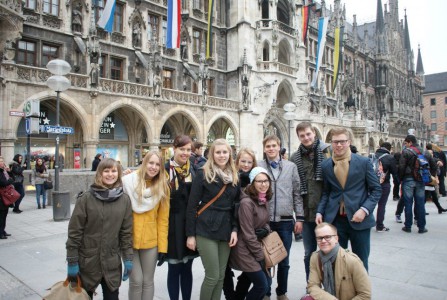 As we found out that we were selected to go to the 72nd International Session of the EYP in Munich, probably every one of us was excited. Anyhow, by receiving lots and lots of e-mails one after another everyone also got a bit tired of the thought of having to do lots and lots of preparation for this session which seemed to be something a bit more than the regional and national sessions. When our plane took off, who would have known what we would experience during those next 10 days.

When arriving to the Youth Hostel in Munich we went through different stations, where we received our badges and necessary information about the session. During this process it really started to feel that we were at an international session with 300 other young people from all around Europe, who were passionate about same things as we were. When the team building began and we got to know all of the people from our committee, again it started to feel more and more that we were in the right place.

Team building took two days and during those days we could see every committee developing into a team, rather than just a group of individuals. We played funny and embarrassing games, talked about our hopes and fears towards committee work. We also socialized outside of team building with the people from other committees during lunch and dinner breaks as well as during the evening program, which was held in different places every night. In Eurovillage every delegation had its own table full of goodies from their country. So did we, and our Fazer sweets and rye bread were very popular as well as playing Angry Birds on an iPad. We also experienced a Bavarian night full of traditional Bavarian games.

The Committee Work – From Silence to Full Debate

The theme of the session was Resourcing Europe. Resourcing Europe were 15 committees with a wide range of topics from the Euro crisis to Europe’s water supplies and personal data protection. When the committee work began, we had four quite rough days filled with changing of ideas and debates, but at the end it was all worth it. At first the time reserved for committee work seemed like a lot, but at the end it was really good to have that much time for it, because we weren’t in a hurry.

The two days of the GA were held in BMW Welt Auditorium. The venue definitely couldn’t have been better. As one of the major sponsors, BMW really offered us the best. The debates were lively and sometimes it was difficult to have your say because everyone else wanted to have their opinion heard, too!

All of the people were friendly and open. The atmosphere of course was international and it was easy to talk to everyone no matter whether they were delegates, organizers or officials, because everyone was interested to hear about you, your country and your opinions. We were one big EYP-family, who lived in their own bubble for the 10 amazing days. The trip was amazing but also exhausting – it was great to come home to rest a bit after all the lack of sleep. Six of us also experienced an extra adventure that included a fancy hotel night as our flight back to Finland was delayed for 18 hours. We arrived home almost one day later than we were supposed to but at least the delay was noticed in the media as Ilta-Sanomat wrote a short article about it.

Perhaps now many of us are suffering from PED, post EYP depression. Having experienced something like that for 10 days must leave a sign in everyone. But this is definitely not the end of our EYP career. The International Session probably just emphasized the desire to continue with EYP, to dive deeper into its world perhaps as a journalist, chairperson or organizer. EYP has given lots of good memories and experiences and taught some really important things for the life. This experience was something that will have an effect in our lives even after many years, in the form of friends and knowledge.

On behalf of the Finnish delegation,
Lotta Moisala & Iida Kalliokoski